Geofolia the proven crop recording and mapping program developed by Isagri, Landmark’s parent company, is well-established in Europe.  Geofolia was selected by Landmark three years ago and has made inroads into the UK market as an easy to use crop management tool with integrated mapping, stock management, compliance and financial reporting functions as standard.

Early adopter Stephen Eales has been testing Greenscan on his Sussex business J.G. Eales & Sons, a business farming 1200 acres of arable in Sussex.  “‘Greenscan gives you regular satellite images of your crops by measuring light reflected from the crop canopy. Thicker crops can be easily distinguished from thinner crop areas. You can scan your whole farm in a few minutes and identify problems rapidly enabling you to target areas to be inspected closely, for example, wet spots, pigeon grazing and rabbit damage.  Over a season poor crop growth area will show within fields enabling these areas to be noted for nutrient deficiency testing, soil sampling or for subsoiling to remedy soil compaction.”

Popular useful standard features include the ability to import directly into Geofolia agronomist’s recommendations and a ‘split activity button.’  The latter for when the weather turns against an operation; it allows a pre-ordained field activity to be split if the operator has had to postpone the work schedule – for example a change in wind speed during spraying.  Version 6.2 also boasts the new ‘Field performance dashboard’ for instant access to profitability by field from any smart device with signal.  The software is available as cloud hosted or PC install. 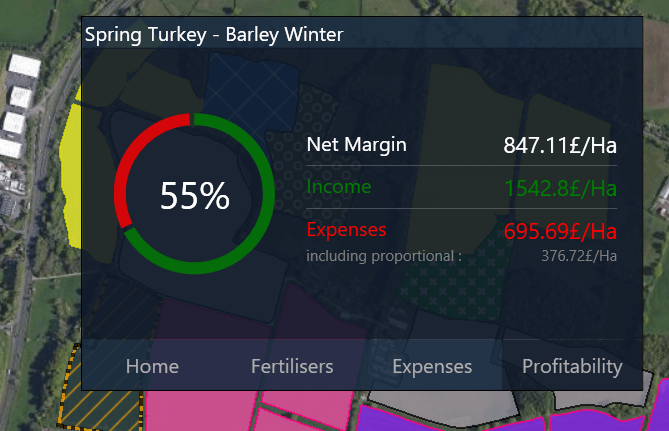 The Landmark Team will be demonstrating Geofolia and running a competition to introduce Greenscan, the winner will receive a new iPad which relates to the Geofolia strap line – ‘spend more time in the field, less in the office’.

Visitors to Cereals are eligible or entries can be made by clicking here.